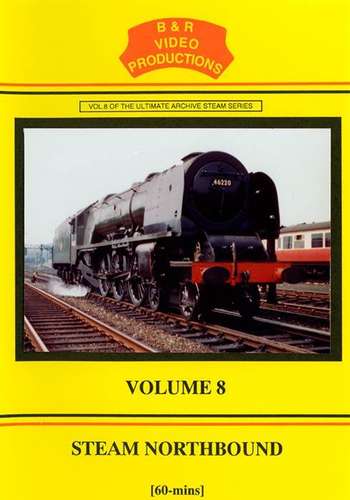 This production features pre-1968 BR steam in the north, much of it in Scotland, with some extraordinary special workings dating back to 1959 with locomotives that have been in museums for 30 years since.

The first section shows BR steam in and around the Dumfries area in the early 1960's. The inevitable Black 5 is well covered, but also a 2P, Jubilees, Scots, Clans, an A2, A4s and Britannias. Locations include Beattock and Quintishill.

The second section shows main line specials with a difference:

The final section (25 minutes) brings us up to date with glorious scenes of the Highlands as we follow and ride behind 5407 on the Fort William to Mallaig line in 1984.

Breathtaking line shots of the locomotive bounding away through the Scottish hills and along lochs in glorious sunshine, over Glenfinnan viaduct and into tunnels.