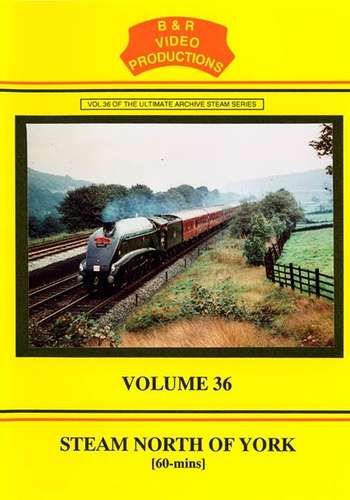 This video looks at the territory with scenes dating back to 1949 at Thirsk.

York has a good variety of classes on shed in the early 1960's from Pacifics to freight locomotives.

The film follows the route to Whitby and some views near Kippax with Q6 class on coal duty.

North from Leeds via Ripon, the East Coast Mail Line is reached between Poppleton and Northallerton with scenes at the half-way point of this express route.

A visit is made to Darlington Works in 1964.

Steaming up the Weardale branch, Consett is reached and a look at the 9F 2-10-0's working freight from Tyne Dock.

Newcastle and Gateshead are visited before going north of the Tyne to see the Reedsmouth branch with the Wansbeck Wanderer railtour of 1963.

The North Eastern Railway ended at Berwick and steam finished on the region in 1967 around Sunderland and Hartlepool.

The freight scene at Tyne Dock, Seaham, Seaton and Ryehope end this always moving visit to the North Eastern Region.

20 different classes of locomotive are included.

No modern day material has been used in this production. 94% is in colour, only Thirsk in 1949 is black and white film.

It is fully sound-tracked with an informative but not obtrusive commentary.