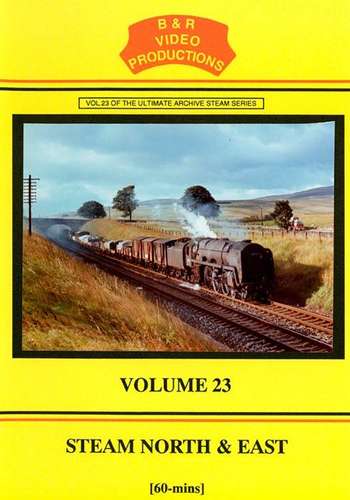 Complementing Volume 21 we cover main lines and branches from the Midlands to Scotland and the East Coast Main Line.

The "Wandering 1500" railtour using B12 61572 from Broad Street to Stratford-upon-Avon via Bedford and Northampton is featured.

This is followed by steam at Tebay and a long section of steam in 1967 on the Settle and Carlisle line.

Scotland is reached via a railtour from Manchester using Merchant Navy 35026, Jubilee "Bihar & Orissa" and 4472 "Flying Scotsman" via the Settle and Carlisle and Waverley Routes.

Then a look at A4s, Standards and Black 5s between Aberdeen and Perth.

Duchess 46245 "City of London" is motive power from Kings Cross to Doncaster for a visit to the Works where we see 60014 "Silver Link" withdrawn but still intact.

Oh yes, even "Clun Castle" climbing Potters Bar all go to making this a DVD you should not be without.