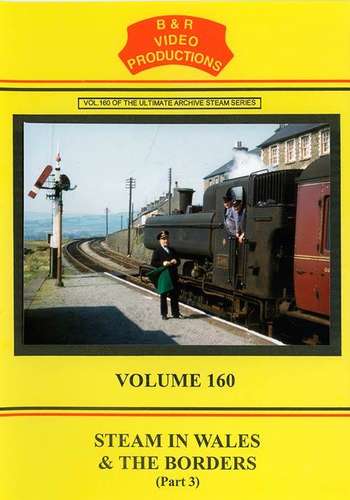 Part 3 begins at Shrewsbury in the 1970s and 1980s with a brief look at the main line runs with steam that returned here on the North-and-West route to Hereford.

Back to the 1960s proper, and archive film at Hereford on its route to Gloucester. Then on to Talyllyn Junction for the northern section of the Brecon and Merthyr Railway with its pannier tank service through Talybont-on-Usk and Torpantau.

The Aberystwyth to Carmarthen line was another route into South Wales and we travel this route including a visit to its Aberayron branch, a source of important milk traffic. Then southwards to Pencarder and Bronwydd Arms, now home of the Gwili Railway.

The Central Wales line from Llandovery to Portardulais and Swansea is shown in the early 1960s including a visit to Swansea East Dock for pre-grouping 0-4-0 tank engines.

We travel the Vale of Neath line from Pontypool Road to Neath via Crumlin, Dowlais and Quakers Yard leading through the coal mining area of South Wales and visit Abersychan and Graig Merthyr collieries for their 'Paddy' trains.

The South Wales main line from Severn Tunnel to Cardiff and Newport in the 1960s is also covered. Our archive film has many types of Great Western locomotives from Castles, Halls, Granges and Manors to 28xx, 72xx, 56xx and Panniers.

All in colour with an authentic sound track and a highly researched and infomative commentary.