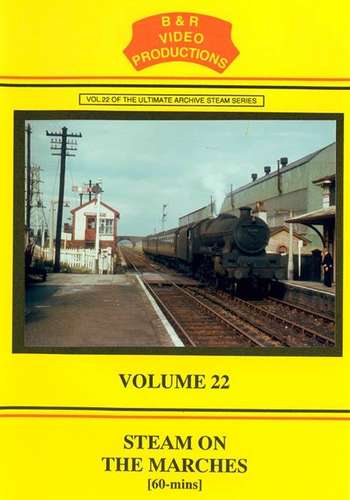 Long closed branches in Shropshire and the Welsh Borders are featured, such as Much Wenlock and the Severn Valley line to Shrewsbury and Bridgnorth via Berrington, Cressage and Ironbridge.

The Llanfyllin branch from Llanymynech on the old Cambrian is followed by Wellington to Crewe, and the Cambrian branch from Ellesmere to Wrexham, featuring an auto train with ex-GWR 14xx as motive power.

A rare shot of Bishops Castle Railway precludes a look at the Shrewsbury to Stafford via Newport line.

Colonel Stephen's Shropshire and Montgomery Railway was always a favourite with enthusiasts and Bill Cross covered the SLS last day railtour with WD 0-6-0ST 193 (now preserved) in 1960 and a look at the surviving section at Shrewsbury in the 1980s.

Rare footage of the Clee Hill quarries on the branch from Ludlow follows, and freight on the Hanwood to Minsterley branch is a real gem.

Oswestry to Gobowen was the GWR route into the Cambrian system with its little halt at Park Hall.

Good coverage of the Welshpool and Llanfair in 1963.

A trip through the backstreets with steam is the penultimate section before looking at Bill's offcuts on the Cambrian which, as a whole, were not used in Volume 19.

Most of this film is in colour, obviously Bishops Castle is not! We think you will enjoy this video of rare branch line coverage wherever your loyalties lie with its ex-GWR and LMS motive power.