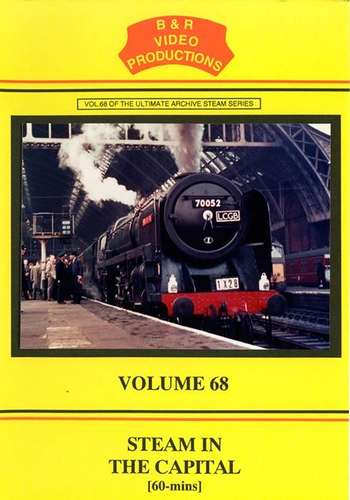 A nostalgic look back to London's termini for the Big Four in the 1960's and on lines radiating from them.

At Marylebone, we go north to Chorley Wood with 2-6-4 tanks, Rickmansworth for a B1.

Growler No.11 of London Transport leads us to Neasden and the work of LT's pannier tanks at Croxley and Farringdon.

A Britannia and Patriot are at St.Pancras with Scot and Jubilee.

Next door was King's Cross and the East Coast main line to Hatfield.

Next, the Great Eastern from Liverpool Street, through North London and east to Colchester and Ipswich, Britannia, J15 and even a D16 4-4-0.

Fenchurch Street to Shoeburyness with 2-6-4 tanks.

Over to Paddington and the Western main line to Reading via the Marlow branch, Castles, Halls and auto-tanks.

At Reading we meet the Southern Railway.

Return to Waterloo via Feltham for S15 and Q1, Clapham for M7, ex-GWR pannier tanks, W Class and Fowler tank.

A Schools and Lord Nelson appear before nostalgic views of Beattie well tanks and an H16.

See what a 1960's railway enthusiast and all the cockney sparrows witnessed on a visit to England's Capital City.