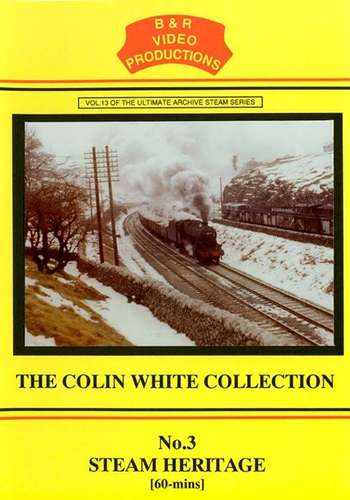 A profile of Buxton MPD on a snowy St. Valentine's Day in 1968 with 8F's storming up to Peak Forest well loaded, steam's last winter in the hills.

With steam gone from the Western region, BR still allowed the occasional special working in 1967 and 1968.

A glimpse of the GWS at Taplow as 7808 brings in a special from Birmingham.

What must be almost unique film of 1466 double-heading 6998 on the main line at Hemerdon, Totnes, Tiverton Junction and the Teignmouth sea wall follow on a dark day in 1967.

After a clean-up and a repaint 1466 delights us on the Wallingford Branch with its auto-coach.

Southern steam in 1961/2 with a complete mixture of SR classes around Staines, Havant, Guildford, Woking and the SR Main Line.

Rare footage of the French President's train and the Royal train amongst the Bournemouth Belles and 34042 hauling a train of LNER articulated stock.

As this is Volume 13, we include the lucky and unlucky results of accidents and incidents which happened in front of the camera over the years. Many accidents however almost have a touch of humour about them. It is these that follow:

At Lytham Motive Power Museum a coach is re-railed
At Nine Elms the breakdown train completely blocks the exit at the turntable
34092 has demolished a set of level crossing gates in 1982
841 'Greene King' with a buckled coupling rod at Ipswich
A German turntable incident when a steam engine clouts a DMU
Loco upset at Bedlay Colliery and shunting problems at Amble Staithes.

Continuing the Industrial theme of the last two incidents, we have lively shots of colliery engines working their rods off as they pound up and down some ridiculous trackwork at Brynlliw and Pontardulais; the last engine skidding into the future!

This video really has some interesting and rare footage from the great days of steam.