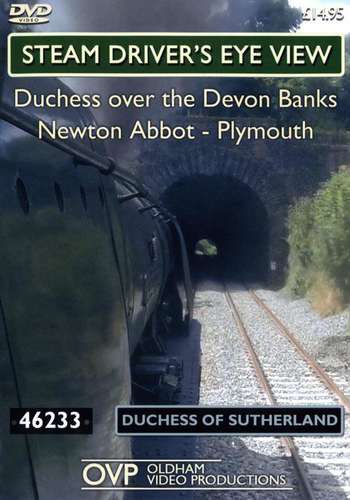 An exciting prospect as we once again tackle the South Devon Banks, in the with one of Sir William Stanier’s mighty LMS ‘Duchesses’.

The first part begins at Newton Abbot, where we get straight into the action and climb up the Westbound climbs of Dainton & Rattery Banks, on the edge of Dartmoor, before dropping into Plymouth.
The second part begins at Plymouth and we tackle the Eastbound climbs of Hemerdon & Dainton Banks, and drawing comparisons with the record set by 71000 ‘Duke of Gloucester’.

A bonus sequence also includes the cross the Royal Albert Bridge becoming the first ever Duchess to venture into Cornwall, as well as the climb through the Glyn Valley from Bodmin Road.

With live sound recorded from the locomotive, we bring the action right to you. This program also features commentary, location titles & lineside shots. Crew commentary is also featured, giving us an insight how to handle a steam engine on one of the most challenging stretches of line in the UK.