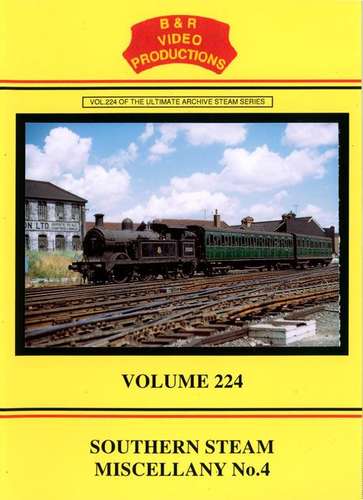 The fourth volume in our popular “Miscellany” series to cover Southern steam and compiled from much previously unseen footage from a variety of different collections. Straight from the reel!

We start at Waterloo before heading out to Vauxhall, Clapham Junction, Nine Elms shed and Woking before visiting Guildford and it’s shed. Other locations include Chertsey, Virginia Water, Ascot, North Camp and Alton. Basingstoke is particularly well covered from the early 1960s until the end of steam. Here, in addition to the normal fare of Bulleid Pacifics and BR Standards, we see Schools 4-4-0s and King Arthur 4-6-0s all hard at work.

In Sussex, we visit Rowfant, Rotherfield, Hellingly, Keymer Junction, Hassocks, Clayton Tunnel, Slinfold and Newhaven plus a journey from Horsham to Brighton with an E4.

At Winchester, both stations are seen before we travel to Eastleigh for visits to the works and the shed. Then to Southampton in 1963 for a tour of its extensive docks including the Ocean Terminal. Double-headed USA tanks then take us from Southampton Terminus along the branch to Fawley. There are brief scenes on the Isle-of-Wight in 1961 and the Hayling Island branch in 1963. Brockenhurst is another favoured location which includes the era when M7s worked to Lymington. Moving further west, more places visited include Christchurch, Bournemouth, Wareham, the Swanage branch and Weymouth plus a couple of clips of the S & DJR!

Further west, in “Withered Arm” territory, Z 0-8-0Ts are on banking duty at Exeter and we view the steeply graded line between Braunton and Ilfracombe as well as Beattie tanks at Wadebridge and Boscarne Junction. Southern locos are also seen away from their home region at locations such as Reading, Reading Central Goods, Oxford, Wellingborough, Stratford-upon-Avon, Leamington, Rugby and Banbury.

Almost all the archive film is in colour and the majority of the film covers the years from 1961 to 1967. An authentic soundtrack has been added along with an informative commentary to complement this nostalgic look at the last years of Southern steam.