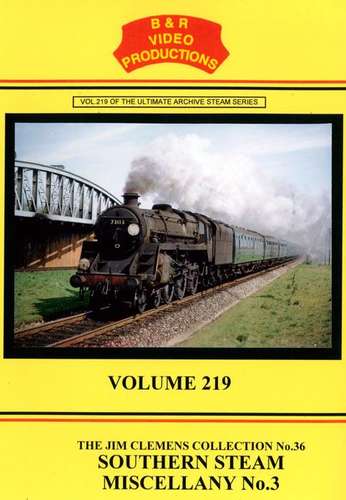 The third volume in our popular “Miscellany” series to cover Southern steam. It again features previously unseen footage from the Jim Clemens Collection mostly compiled in the order the film runs off the original cine reels.

Here we feature more steam mostly from the South Western Division including some rare footage.

Oxford is the starting point in the summer of 1965 for two trips on the southbound ‘Pines Express’. A last journey is made in December 1965 over the Somerset & Dorset Railway from Templecombe to Bournemouth.

A cross section of latter-day Southern BR, & LMS motive power is seen, even the odd’ Warship’ diesel and D65xx.

The archive film is entirely in colour and covers the years from about 1963 to 1967. An authentic sound track has been added along with an informative commentary to complement this nostalgic look at the last years of Southern steam.