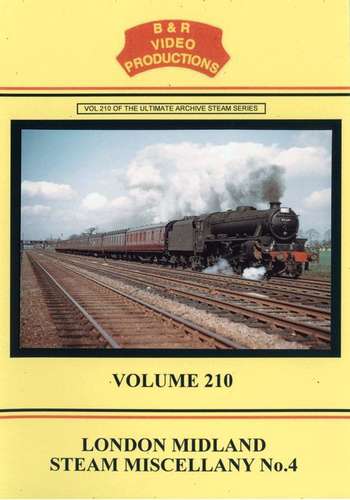 The fourth in our miscellany series covering London Midland steam. Once again we feature much previously unseen film, largely assembled in the order the film runs off the original cine reels with scenes across much of the Region.

There is considerable coverage around the North-West including Crewe South Shed, Crewe Station, Crewe Works (with “Western” diesel-hydraulics under construction), Stoke-on-Trent Shed, Moore water troughs, Warrington Bank Quay and Warrington Arpley. A brake van tour of obscure lines around Warrington and Widnes behind Standard 2-6-0 No.76077 includes a refuge siding at Daresbury (part of the original Birkenhead route abandoned with the opening of the Manchester Shop Canal in the 1890s) plus that famous railway curiosity at Widnes, a rail flat crossing by No.4 Signal Box! There is plenty of steam action at Winwick Junction, Wigan North-Western and Wigan Wallgate before we move on to Leyland, Farington Junction, Pleasington and Preston. Further north, we visit Carlisle for scenes at Kingmoor Shed as well as at Citadel Station.

South once more and Chester, Gresford Bank, Llangollen Junction (Ruabon) and Hooton are all visited in March 1967 coinciding with the end of the direct Paddington to Birkenhead service. Further south, in 1964, visits are made to the Bletchley flyover, Aynho water troughs, Gloucester, Banbury, the Lickey Incline (including an amazingly long freight train ascending the bank) with summer Saturday holidaymaker trains being seen at Birmingham.

The archive film is in colour and black & white and was filmed between 1963 and 1968. An authentic sound track has been added along with a commentary to complement this further nostalgic look at the last years of London Midland steam.