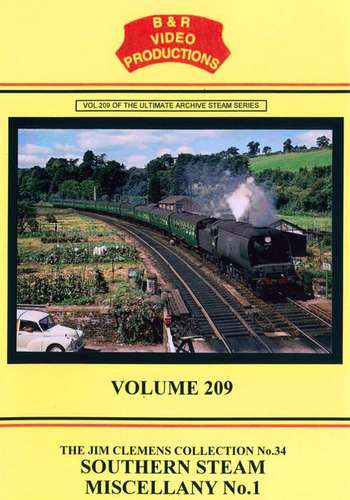 This is the first volume in our popular “Miscellany” series to cover Southern steam. It features previously unseen footage from the Jim Clemens Collection and is mostly compiled in the order the film runs off the original cine reels. In this volume we feature a wealth of Southern steam with particular emphasis on the Withered Arm, Basingstoke and Somerset & Dorset areas as well as between Weymouth and Lymington Pier.

In the 1960s, Jim Clemens purchased a significant quantity of original 16mm offcuts and unused film directly from Pat Whitehouse. These were from the BBC “Railway Roundabout” TV programmes. Some of this footage has been used in this volume and includes a journey from Bath Green Park to Evercreech Junction with 7F 2-8-0 53807 plus T9 4-4-0s working on the Withered Arm lines.

The archive film is in both colour and Black & White and was mostly dates from 1960 to 1967. An authentic sound track has been added along with a commentary to complement this nostalgic look at the last years of Southern steam.