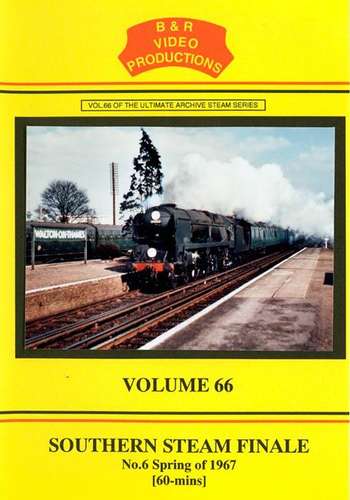 The continuing story of the last eighteen months of Southern Steam. This volume covers the period January to March 1967.

As in all volumes in this definitive series, the general Southern scene is portrayed between Waterloo and Weymouth.

Although steam was in decline from the January timetable, we search it out throughout the region portraying any unusual events and give the reasons why.

There were railtours over normally non-steam lines, the LCGB ran its 100th railtour during this period, much more successful than its 99th, seen in Part 5.

The Surrey Downsman went to Oxted, Redhill and Kensington Olympia; it ended at a steamless London Bridge.

We look at and examine Ron Cover's attempts to dignify the steam engine with fabricated but brilliant numberplates.

3442 "The Great Marquess" visited the region and we follow its run from Victoria to Brighton, Chichester and Southampton.

The first electric trains ran on the Isle of Wight as the last O2's were cut up at Newport.

Another tour took a Bulleid pacific to Eastbourne.

The story is told in the usual informative manner of this series after much research and knowledge from people who witnessed these events.