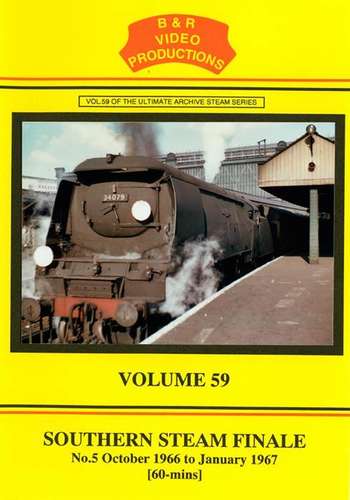 The next volume in this definitive series of the end of Southern steam, now being collected as the historical record of the time, covers the four months of October to December 1966 and into January 1967.

Once more, sixteen cameramen supplied material for this volume allowing the full story to be told for the period.

As a video of Southern steam it also stands on its own since the general steam service is filmed over the South Western lines from Waterloo to Weymouth.

However, as with all titles in this series, full coverage of rail tours of the period is included.

Next the Dorset and Hants tour with two un-rebuilt pacifics taking in the Somerset and Dorset to Blandford, the remains of the Ringwood branch and finally Hamworthy Goods.

The end of steam on the Isle of Wight did come on the last day of December 1966 and coverage is given to the whole route remaining from Ryde Esplanade to Shanklin.

Lastly the rail tour to the Bridport branch via Salisbury, Westbury and Maiden Newton with all its troubles is fully related.

Oh yes, and also the last steam run to Exeter!