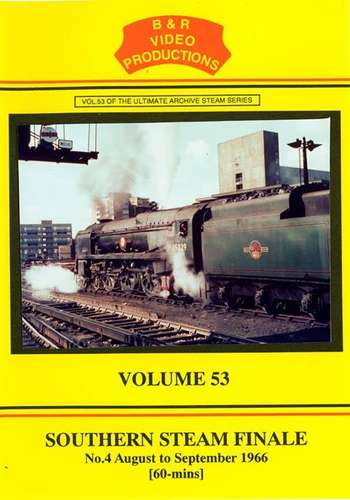 The fourth volume in our series of Southern Steam finales covers the two months of August and September 1966.

There was much to see during the last full summer of steam in the South.

The weather was good and we have chosen the best scenes to portray the Southern scene in general and the railtours that ran in the two months.

Two tours took Bulleid Pacifics to Nottingham on the Great Central, Bulleid stock went as far north as Penistone behind an electric loco of Class EM1.

A general feature is the story of Southern boat trains, passenger, freight and gold bullion!

02's on the Isle of Wight still ran but Black 5's visiting the region ended with the summer timetable.

The Swanage branch is seen in detail before it lost its regular steam service in the September.

All these stories are related in this programme allowing 15 different classes to be seen.

Filmed by competent cameramen, using the best of equipment, this really is the definitive story of Southern steam at the end.

There are only another five volumes to go !!