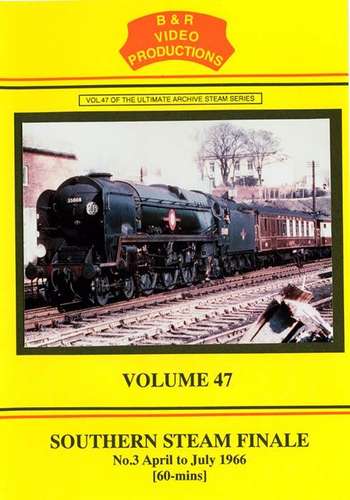 This third volume in the story of the end of Southern steam covers events upon the region from April to July 1966 when the sun nearly always shone and came earliest in the south!

A variety of steam power was still to be seen and we feature 15 classes of engine.

The Waterloo to Weymouth line workings are well covered and this was a time when another section of the Isle of Wight Railway closed, Ventnor to Shanklin.

The last runs of the Maunsell moguls occurred with their magnificent finale on the two Longmoor railtours in April.

"Gordon" of the Longmoor Railway was at large on the Southern Region, and the last steam engine on the Weymouth tramway put in its appearance.

On this day the only Black 5 to work a railtour on Southern metals is seen.

This video has full lineside coverage of these events with some footplate scenes and an in depth look at motive power depots like Nine Elms.

Locations include Bincombe bank, Basingstoke, Wimbledon, Waterloo, Windsor, Salisbury, Bournemouth and Yeovil, along with Ryde to Ventnor on the Isle of Wight.

There is even a trolleybus and a flying P.W. trolley!