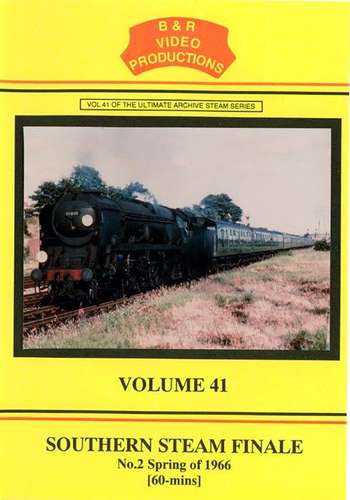 This DVD looks at the events on the Southern Region in March/April 1966 and features 17 different BR and Southern classes.

It covers Waterloo to Weymouth main line and its workings plus three railtours.

The "New Forester from Eastleigh to Gosport, Fawley and Lymington, with U, Ql and USA tanks.

The visit of A4 pacific Kingfisher for a whole weekend for runs to Weymouth and Exeter.

The Wilts and Hants utilised U and N Class moguls and the last run with a Bulleid Ql Class, 33006 from Salisbury.

The many main line trains are seen at locations such as Waterloo, Clapham, West Byfleet, Basingstoke, Eastleigh, Southampton and Bournemouth, and lineside in between.

Steam in Kent is seen by way of the steam outpost at Ashford wagon works where a C Class 0-6-0 still worked alongside two departmental USA tanks; others are seen at Southampton Docks.