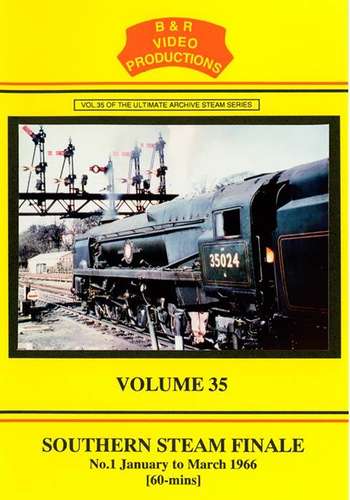 Yes, there have been many DVDs of Southern steam from Waterloo, we have often included this line on earlier DVDs in our range.

But we thought there was good reason to promote this series when we came across so much good footage of film taken between 1966 and 1967 in such detail as we have been able to amass.

From at least 12 collections we can tell you the complete story of the run down period in Southern steam history.

And it will not be all Bulleids and Standards either.

In this first volume we feature sixteen different classes and over sixty different locomotives and that only takes us from January 1st to March.

The highlights of this period was the closing of the Somerset and Dorset, the last Maunsell S15 tour in the snow and the closure of the Ryde to Cowes line via Newport on the Isle of Wight.

These events are punctuated by normal Southern steam workings from Waterloo to Weymouth and the last Somerset and Dorset workings.

Further volumes will continue this story to the end of Southern Region steam in July 1967 with all the visiting locomotives featured, not a quick glimpse but a full coverage from the lineside and train, so if you witnessed Southern steams passing by travelling on one of the 58 specials which ran in this period under review or just stood by the lineside to witness their passing and last farewells this has to be a series you will not want to be without.