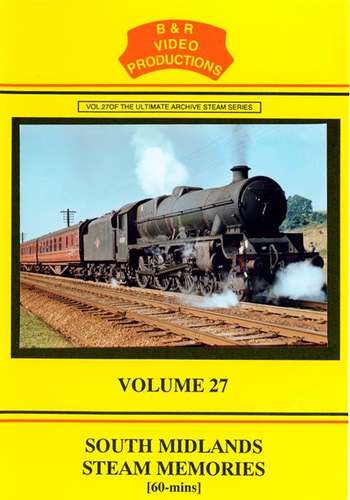 We were fortunate indeed to obtain film from Douglas Haines of the lines south of Birmingham, taken from 1960 onwards on 16mm Kodak stock and all tripod work.

This volume takes us through the southern approaches to Birmingham, the Lickey Incline and on through Barnt Green and Kings Norton with the Halesowen branch, the GWR route via Hatton Bank and then the North Warwick line through Henley-in-Arden to Danzey.

A feature of this film is the workings of the locomotives on the three banks of these lines with long detailed shots of engines working hard and the rolling stock of the time, now just a memory.

All three sections feature the normal service trains applicable to them such as Jubilee, Scot, 9F, 3F, 4F etc. on the Midland with Hall, Castle, Grange, 9F and Standards on the Western.

Nevertheless each section also has one surprise visitor.

The Lickey has SR unrebuilt Pacific 34079 climbing banked by a 9F.

Hatton shows us the restored GWR prairie 4555 on a brick train and the North Warwick line affords us a view of an ex-LMS 4F coupled to ex-GWR 6435 passing through on a railtour.

The film covers all seasons from high summer to mid-winter with snow scenes around Kings Norton where surprise, surprise, ex-LNER 4472 "Flying Scotsman" passes by on a 3-coach private special which includes the ex-Devon Belle observation car.

4079 "Pendennis Castle", while still in BR ownership, concludes this fascinating video which all true enthusiasts will want to have in their collection.