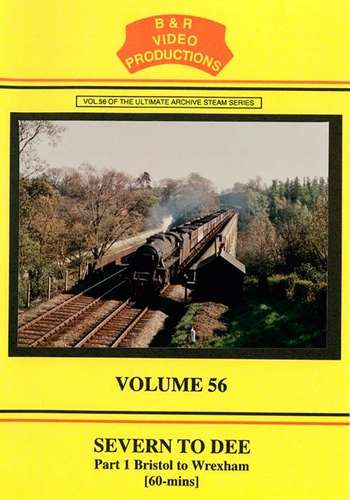 A film on the railways between Bristol, where the River Severn eventually reaches the sea, and Wrexham, close by the River Dee, in the age of steam.

The Midland route is taken from Bristol to Gloucester calling at Berkeley Road for a l4xx on the Sharpness branch.

Gloucester on the Severn shows normal steam freight working before 3440 "City of Truro" visits in 1985.

A diversion away from the Severn takes the story through Birmingham and Wolverhampton, the Great Western's route to the north.

On via Madeley Junction and Upton Magna, which closed in 1964, showing more steam.

Shrewsbury, standing well and truly on the Severn, is covered in detail and interesting rare views portray a Royal train, a diesel crashed into a signal box, a Duchess on a running-in turn from Crewe in 1962, amid normal steam working up to March 1967.

We then go north to Gobowen and Oswestry.

The days when Weston Rhyn had loops, signal box and exchange yards for Ifton Colliery are seen, days of industrial locos working the line to the colliery.

1966 steam takes us over the Welsh border at Chirk onto the River Dee viaduct at Newbridge.

A few scenes of steam railtours in the 1970's are included to enhance the story but they were still seen amid the infrastructure of a steam worked railway of semaphore signalling and crossing gates.