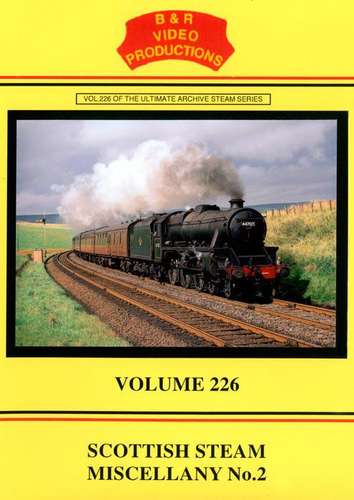 The second volume in our popular “Miscellany” series to cover steam in Scotland. This time we see much previously unseen footage mainly across the Central Lowlands and Southern Uplands.

Starting at Carlisle, a brief call is made to Canal Shed before seeing a locally based J39 on the Langholm branch followed by a visit to Hawick on the Waverley Route. At Kelso and Northam we catch a glimpse of the local Tweedbank service between St. Boswells and Berwick.

Back to the WCML, there are visits to Beattock, Beattock Bank and Lockerbie where an ex-Caley 0-4-4T is shunting. On the ex-GSWR main line, Dumfries is well covered (including it’s shed), before we head off along the “Port Road” to Stranraer via Castle Douglas visiting New Galloway, Newton Stewart, the Whithorn branch, Dunragit and Stranraer shed along the way. At Ayr, there are 2-6-0 “Crabs” in action on the coal trains and we watch passenger services on the Heads of Ayr branch, Prestwick, Dreghorn, Barleith Halt and Mauchline as well as visiting Hurlford shed.

We return to the east coast for views in and around Edinburgh including Haymarket shed, Waverley station, St. Margaret’s shed, Bathgate, Portobello and Reston. Then into Central Scotland for steam action around Stirling followed by visits to Alloa, Killin and Connel Ferry. Time is next spent at Forteviot including seeing a “Princess Royal” and the local pick-up freight. Finally, we visit Perth, Dundee shed, Wormit, Broughton Ferry, Thornton Junction, Bankfoot, Forfar, Kilmany, Lindores and the Carmyllie branch.