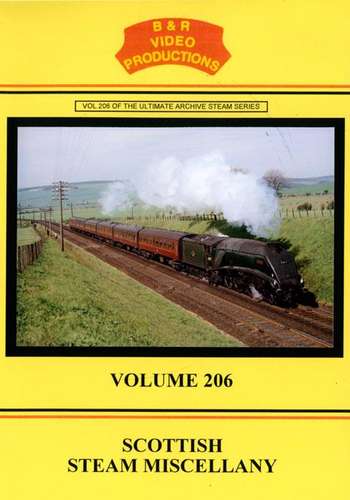 Another in our steam miscellany series, but this time covering Scotland. Again, it uses mostly previously unseen film compiled in the order the film runs off the original cine reels and largely without our usual detailed commentaries.

We begin at Carstairs with a very slippery 46244 "King George VI" and then move to Edinburgh Waverley for the first of a number of visits here that also includes St. Margaret's shed and Craigentinny carriage sidings. Not forgotten is the now-closed Caledonian Railway terminus in the city at Princes Street.
Few would have thought that the final work of Gresley's famous A4s would have on the well known three-hour expresses between Glasgow and Aberdeen. In fact, by June 1964, only one class member was left in England. This route is covered in detail including at Glasgow Buchanan Street, Larbert, Plean, Stirling, Bridge of Allan, Gleneagles, Perth, Forfar, Laurencekirk, Stonehouse, and Aberdeen. There is also extensive coverage at Thornton Junction and Dundee.

At Montrose J37s are seen going about their daily duties, whilst at Aberdeen we make a visit to the Gas Works whose locomotives had tramway-type skirts enclosing their motion.

We next visit Glasgow Central and Paisley Gilmour Street whilst at Kilwinning a Caledonian 'Jumbo' is seen at work as we head towards the Glasgow & South Western stronghold of Ayr. Here there are 2-6-0 'Crabs' aplenty on freight trains, a double-headed boat train from Stranraer, steam on the local to and from Kilmarnock, plus also a lightweight Park Royal railbus.

Filmed largely in colour and mostly during the 1960s, an authentic soundtrack has been added along with a commentary to complement this further nostalgic look at the last years of Scottish steam.