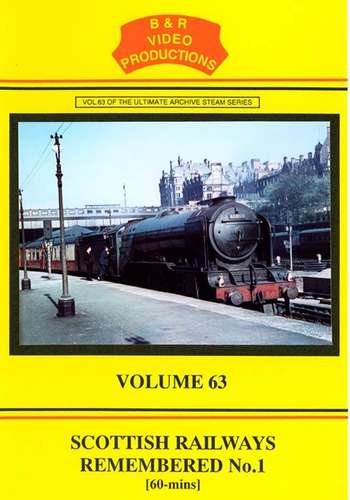 A general look at the railways of Scotland from 1960 to 1966, from Ayr to Wick and Mallaig in the west.

Beginning with the Caley single No.123 we move on to see the route from Perth to Aberdeen with A4 and V2 classes.

A look at South West Scotland around Ayr, and Carlisle with Crab, Black 5, Standards, a Princess Royal and Caledonian 0-6-0 tanks.

A tour of Glasgow sheds in 1960, infinite variety here.

The Killin branch and Ballachulish with steam, and on to Fort William and Mallaig with K1, K2, and J36.

The Far North line with steam at Inverness and early diesels to Wick and Thurso although a Pickersgill 3F 4-4-0 appears at Thurso.

South to Perth via Inverurie and Craigellachie for more steam at Gleneagles and Stirling.

Via Kinross to the Forth Bridge brings us to Edinburgh Waverley when A3's still had the "Queen of Scots" Pullman.

Finally, No.123 again on that infamous Scottish Rambler tour of Easter 1963 from Dunblane to Crianlarich via Killin when it snowed!

Of all this will the steam railways of Scotland be remembered.