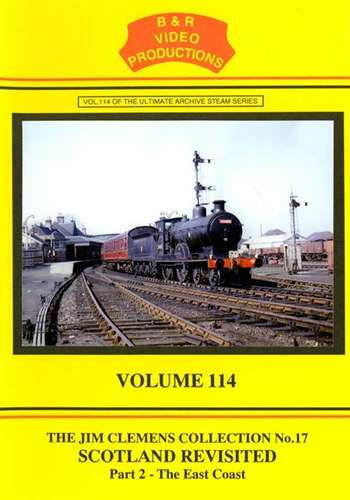 This is the second volume in a trilogy of videos on Scottish railways from the Jim Clemens archive collection and covers the eastern areas of the railways north of the border.

Edinburgh Waverley using 1930's film with a comparison to the 1960's using a Deltic diesel.

Visit St. Margarets and Dalry Road sheds in Edinburgh before leaving on a 1963 railtour with North British No.256 and J36 and J37 types to Queensferry, Thornton and Alloa.

There is a visit to Fife for NCB workings at Dysart before leaving the eastern side of Scotland for the infamous Caledonian Railway Single No.123 1963 tour from Glasgow to Crianlarich in the snow.

The Inverbervie branch from Montrose, Brechin and the Carmyllie branch.

The Highlands of Scotland feature with visits to Inverness, including its shed, from where a run with Highland Railway 4-6-0 No.103 travels via Elgin to Inverurie.

Finally steam at Perth and Stirling and a trip on the Thames-Clyde Express out of St Enoch to Carlisle.

Here there is a look at Kingmoor with Duchess locos.

A detailed commentary and authentic soundtrack completes a nostalgic look at Scottish steam.