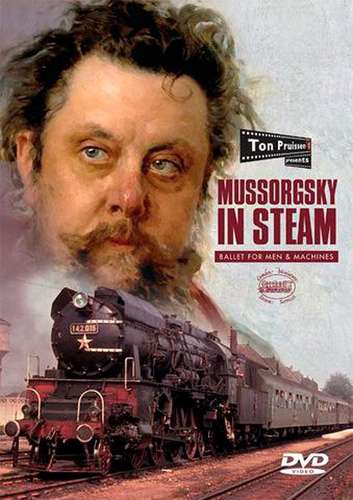 A UNIQUE FILM!  A UNIQUE LISTENING AND VIEWING EXPERIENCE!

In this DVD Ton Pruissen has taken a piece of classical music which has no connection at all with the steam locomotive or railways and has added to this clips of railwaymen and steam locomotives to accompany the mood of the music. When Ton told me of this project I was dubious as to how it could work, but work it does, very satisfyingly.

The music is a cycle of pieces for piano entitled 'Pictures at an Exhibition', composed in 1874 by the Russian composer Modest Mussorgsky (1839-1881), who was a close friend of the architect and painter Victor Hartmann, who died suddenly in 1873.

An exhibition of Hartmann’s paintings took place the following year. Mussorgsky visited this and was so moved that he composed a cycle of pieces for piano, entitled “Pictures at an Exhibition” to honour his friend.  In 1922, the French composer Maurice Ravel arranged these piano pieces for orchestra, and it is this version that became world-famous.

The music begins with a short promenade. You come to painting, you look at it, then promenade to the next painting. The last painting is the rousing “The Great Gate at Kiev”. Mussorgsky’s composition and Ton Pruissen’s film making and editing skills combine memorably in this film.

The railway film segments of this film were shot in Indonesia, India, Zimbabwe, Turkey, East and West Germany, Poland, Czechoslovakia, Hungary and Rumania.

“Pictures at an Exhibition” is here played by the Russian National Orchestra, conducted by Carlo Ponti, by kind permission of Pentatone.

These two short clips will give you a glimpse of this marvellous combination: You can enjoy the music on a surround system, or on a normal stereo system.