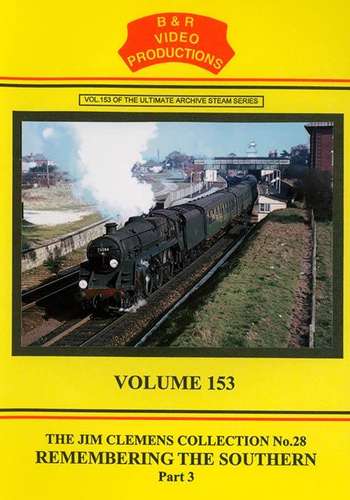 A third volume of Southern Steam memories from the Jim Clemens archive film collection, this time featuring the South Western Division in Hampshire and Dorset in 1966 and 1967.

After a brief glimpse of Waterloo station exterior, there is coverage of steam from Southampton to Bournemouth and Weymouth with Bulleid Pacifics.

Next we feature four railtours with a variety of motive power including a Stanier Black 5, USA tanks to Fawley, a Maunsell Mogul to Gosport, visiting A4 Pacifics, 60024 'Kingfisher' and the newly preserved 4498 'Sir Nigel Gresley' both to Weymouth and an Ivatt 2MT along the Weymouth Quay Tramway.

Normal service trains see steam haulage along the main line through the New Forest area with both rebuilt and unrebuilt Bulleid Pacifics, plus BR Standard classes.

There is also extensive coverage of the Lymington Branch to the end of steam in 1967, including views of Lymington Pier station from the ferry!

Includes plenty of action at Bournemouth Central with its shed visible from the main down platform, well filmed and with an abundance of detail.

Finally, brief visits to Broadstone, Bournemouth West with the Pines Express, Swanage with a special, and a last look at mainline steam.