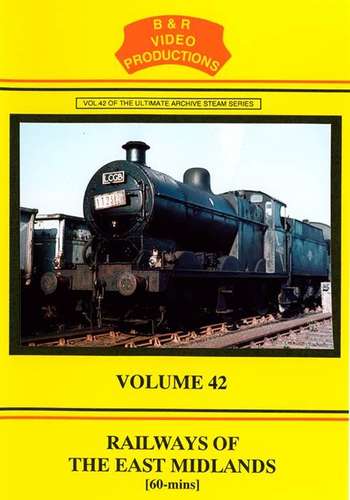 Three main railways ran through the East Midlands. The Midland itself, the LNWR and the last to arrive was the Great Central.

This video looks at these lines and their connections and branches from 1959 to 1967.

The GC is followed from Marylebone to Nottingham, with views from 1964 with B1, Hall, Jubilee and 9F, plus the last workings of Stanier's Black 5's when things did not always go to plan; a failure of 44936 at Brackley is a gem!

The Newport Pagnell branch is covered before a long look at the Leighton Buzzard to Luton secondary line.

Luton is featured before a journey along the original Midland route to London, from Hitchin to Bedford, when 3F's still worked the freight.

Northampton to Peterborough East follows before viewing the Seaton to Stamford push-pulls from the lineside, on the footplate and on train.

Ironstone was once the big industry in the East Midlands and an in depth look at the systems and BR's role in taking it away is featured.

Derby Works and shed are visited as well as the Wirksworth branch.

Along with Standard types this shows that the East Midlands certainly had variety.