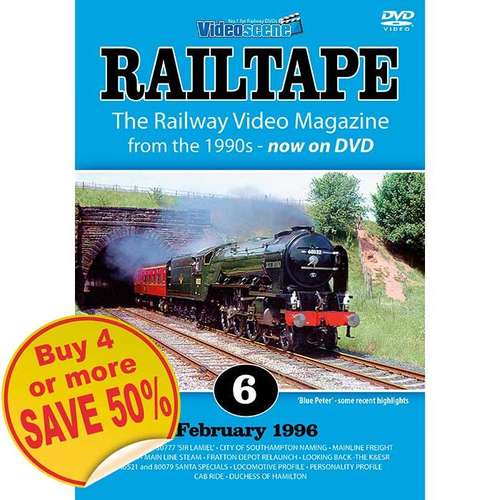 GWR DIESELS: Proving to be the most successful diesel event ever held on the line, Novembers gala saw test and clearance runs for Class 42 Warship No. D821 'Greyhound' and the inaugural run of the freshly restored No 47105. The gala also saw the entry into traffic of the lines 31 No. D5541 - superbly restored to all over green livery.

CITY OF SOUTHAMPTON NAMING: Southampton Central was the location for the naming of Class 442 unit 2420 'City of Southampton'.

MAIN LINE STEAM: 70000 'Britannia's' resumption of S&C steam excursions, following the leaf fall season, and 70000 Britannia standing in for the stranded No.9. This was to be the first S&C working running under WCML wires and terminating at Crewe.

FRATTON DEPOT RELAUNCH: Lord Major Dr. Alan Burnett visited Fratton depot near Portsmouth to mark the re-launch of the depot, which has undergone a wide range of improvements since 1990.

LOOKING BACK -THE K&ESR: Footage from 1986 shows the progress made at the Kent and East Sussex railway, with the third 'Looking Back' feature filmed during Novembers recent steam and diesel weekend.

46521 and 80079 SANTA SPECIALS: Starting with a positioning special to move the SVR engines to Old Oak Common, 46521 & 80079 double-heading out of Worchester Shrubb Hill and down the Cotswold line. Next we see 80079 on subsequent Santa Special duties from Kensington Olympia.

LOCOMOTIVE PROFILE: 60532 'Blue Peter' After reporting the tragic events that forced 'Blue Peter' out of action previously, we dip into our archive to show the engine enjoying happier times.

PERSONALITY PROFILE: We talk to Peter Kelly, Editor of Rail magazine, about his great interest in railways. We also discover some of his other talents and watch him as an early trainee at the Great Central Railway's recently introduced course. "Learning to drive a Diesel train".

DUCHESS OF HAMILTON: Highlights of this engines southern tour. Also footage of the tender derailment at Temple Meads -by courtesy of one of our viewers.