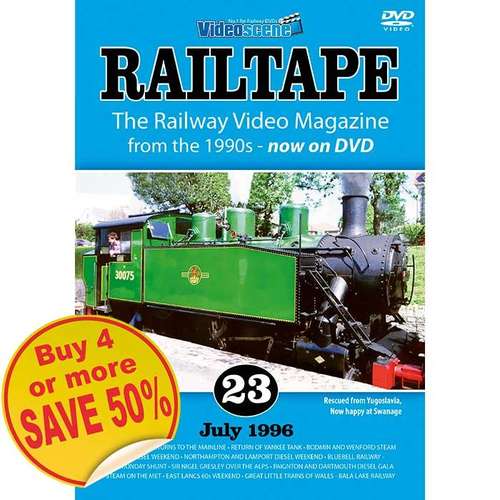 HASTINGS UNIT RETURNS TO THE MAINLINE: Organised by Hastings Diesels, the 'Phoenix Tour' covered some 200 route miles in Sussex and Kent. We caught up with the pioneering special as it worked over the Folkestone Harbour branch line.

RETURN OF YANKEE TANK: The Swanage Railway eased their shortage of motive power with the return to service of their 0-6-0 Yankee Tank. Of similar design to 13 United States Transportation Corps locomotives, the Yankee was rescued from Yugoslavia and is back in service following a major overhaul.

BODMIN AND WENFORD STEAM AND DIESEL WEEKEND: The railway’s May gala saw Class 50 'Triumph' returning to service after a traction motor change, Class 20 No. 20166, 'River Fowey' and the railway’s industrial steamers in action on the stiff climbs over the three and a half mile line.

NORTHAMPTON AND LAMPORT DIESEL WEEKEND: One of the newest preserved lines is the Northampton and Lamport, which opened on 31st March. We went along to their recent diesel gala to sample the offerings, which included a Class 27, D5401, 45118, 25035 and a hybrid DMU.

BLUEBELL RAILWAY - THE MONDAY SHUNT: Recently the Bluebell went on record to formally claim to be the last standard gauge railway in Europe with a working timetable which still includes regular rostered shunting duties. Rostered for the Monday shunt on the 20th May is the Wainwright C Class number 592.

SIR NIGEL GRESLEY OVER THE ALPS: Visiting Pacific 60007 'Sir Nigel Gresley' has been a big attraction at the Mid Hants Railway, both on driving experience courses and service duties. With the engine’s stay at the line being extended we recorded the delights of the 3 cylinder Pacific in action up the one in sixty Medstead Bank.

STEAM ON THE MET: A well established feature of the enthusiasts calendar is the popular ‘Steam on the Met’. The event featured three steam locomotives running shuttles over the Metropolitan line between Watford and Amersham.

VIEWER'S VIDEO - MR JOHN COOKSON: This issue again features railway action recorded by one of our viewers. Mr John Cookson provides this montage of the variety which can be found in Ireland.

EAST LANCS 60s WEEKEND: The hills above Bury echoed to power and nostalgia as the East Lancs opened with a 1960s weekend to start their impressive nine day diesel gala.

GREAT LITTLE TRAINS OF WALES - BALA LAKE RAILWAY: Running along the south shore of Lake Bala, the two foot narrow gauge line of the Bala Lake Railway runs over what was once Great Western territory.

CAB RIDE HIGHIGHTS: We conclude this edition with highlights of a cab ride through the Pennines over the former London and North Western line from Huddersfield to Manchester Piccadilly.