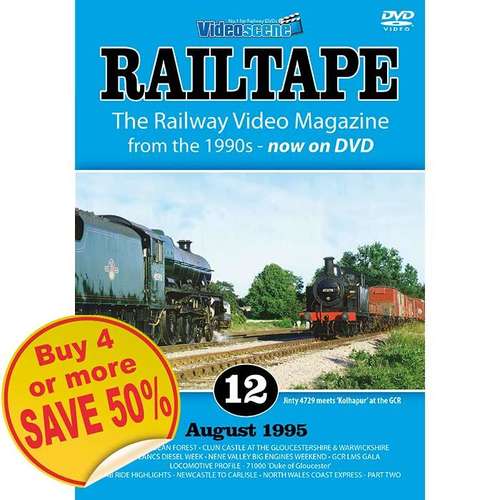 1466 AT THE DEAN FOREST: After the success of No.1466's visit to the Chinnor and Risborough Railway, the 0-4-2 Tank headed west for a brief visit to the Dean Forest. The visit also coincided with the operation of services to the former Severn & Wye Joint station at Lydney Junction, after an absence of 30 years.

CLUN CASTLE AT THE GLOUCESTERSHIRE & WARWICKSHIRE: Sustaining its GWR image, the Gloucestershire Warwickshire railway has hired the Birmingham Railway Museum's flagship engine No.7029 'Clun Castle'. Used on a limited 'as required' basis, it’s first run in traffic was at Toddington and the GWR's 'Members Day'.

EAST LANCS DIESEL WEEK: With as many as 25 locomotives in action at this year’s week long diesel event, nearly every type of diesel and electric motion power available, was represented. Highlights included the re-dedication and entry into service of Class 45/1 No. D61, the debut into traffic of Class 20, No. 20 042 and the first appearance of a 'Deltic' at the ELR.

NENE VALLEY BIG ENGINES WEEKEND: With an influx of locomotives for the 'Peterborough 150' event, the Nene Valley Railway took advantage of the situation and arranged a 'Big Engines Weekend'. A fleet of locomotives - K4 No. 3442 'The Great Marquess', Jubilee 'Bahamas', Merchant Navy Pacific 'Canadian Pacific' and A4 60007 'Sir Nigel Gresley' joined resident Class 40 D306 to share duties on both freight and passenger workings between Wansford and Peterborough.

GCR LMS GALA: As part of their plans to promote theme galas, the GCR lined up six locomotives for its LMS weekend. Securing the services of Jubilee 45596 Bahamas. Resident Jubilee 45593, 'Kolhapur', changed livery again, this time emerging in BR Brunswick Green. Also in action, Jinty 47279 from the KWVR and 4F 4422 from the Churnet Valley, joined the home based Black Five and 8F.

LOCOMOTIVE PROFILE - 71000 'Duke of Gloucester': We review the steam workings of the engine cynics dubbed 'project impossible'. From the first run in preservation at the GCR, the eagerly awaited debut on the S&C - including the record-breaking 'Blue-Ribbon' run, to present day railtours, the unique Pacific is proof that determination, boldness and sheer grit can succeed.

CAB RIDE HIGHLIGHTS - NEWCASTLE TO CARLISLE: This cab ride was recorded on 31st August 1989 aboard Class 143 'Pacer' unit No. 143634, over the route across the Border Country. At the time, as you will see, much of the route still supported semaphore signalling and 'old fashioned' level crossing gates.

NORTH WALES COAST EXPRESS - PART TWO: Part two of this round-up of steam workings over the North Wales route, focuses on the journey back from Holyhead to Crewe in the company of engines such as 46229 'Duchess of Hamilton', 777 'Sir Lamiel' and 4771 'Green Arrow'.