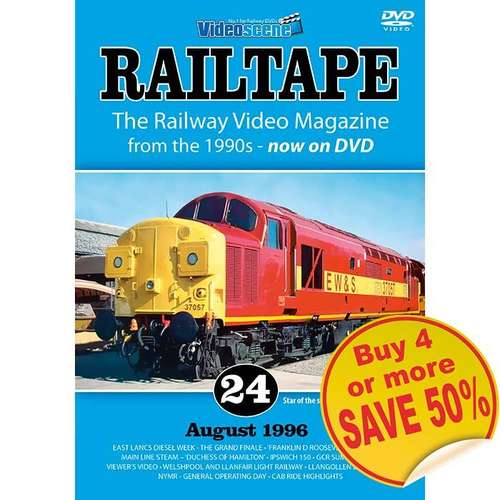 EAST LANCS DIESEL WEEK - THE GRAND FINALE: Deltic Number 2, just one of the powerhouses in action for the East Lancs nine day diesel gala, opens this edition. Other highlights included Class 50 'Valiant' and Peak 'Sherwood Forester', now both returned to BR corporate blue. The Waterman Railways blackberry black livery was seen on the mainline Class 47 'Guy Fawkes' and also Class 20s 042 and 188. However the star of the show was the NRMs pioneer Brush Type 2, D5500, back in action after a 15 year absence.

‘FRANKLIN D ROOSEVELT’ AT THE GWR: The Gloucestershire and Warwickshire Railway now echoes to the sound of a Class S160, currently on loan from the Mid Hants. Now returned to wartime livery as number 3278, the S160 is scheduled to remain at the railway for the summer season.

MAIN LINE STEAM – ‘DUCHESS OF HAMILTON’: On the 8th June, Stanier's majestic Pacific, the 'Duchess of Hamilton' took Pathfinder’s 'The York Royale' from York to Crewe by way of Sheffield, Derby and Stoke.

IPSWICH 150: The Eastern Union Railway opened services between Ipswich and Bury St Edmunds in 1846. To celebrate 150 years, the depot at Ipswich opened to the public to reveal a good collection of static exhibits with departmental stock, modern traction and preserved locomotives. Also as part of the celebrations the Standard Pacific 'Britannia' operated several runs over the line.

GCR SUMMER GALA: The Great Central Railway's Summer Gala was based upon the theme of a typical day at the lineside in the 1960s. The event saw plenty of freight workings with visiting engine the Cheddleton 4F, lined up alongside Black 5 5231, D4 ‘Great Gable’, King Arthur Class 30777 'Sir Lamiel', 8F 48305 and 6960 'Witherslack Hall'.

VIEWER’S VIDEO: A Class 58 on a ballast working opens this issue’s 'Viewer’s Video' item, featuring the work of Nigel and Ron Edwards. They have compiled a lively record of workings around Eastleigh, particularly the many and varied freight flows which use this busy junction.

WELSHPOOL AND LLANFAIR LIGHT RAILWAY: We continue our tour of the Great Little Trains of Wales with a departure of the 'Countess' from the Raven Square station at Welshpool, and a spirited attack on the 1 in 29 Golfa incline. The 'Countess' first made the journey with the railway's inaugural train on the 4th April 1903 and since the re-opening of the line in 1963, the 0-4-0 tank has continued to share much of the work on this steeply graded eight mile line.

LLANGOLLEN DIESEL GALA: The extension of the line to Carrog has brought even more photo opportunities to this attractive line, and this proved no more spectacular than the sight and sound of Deltic 55015 'Tulyar' in action over the extension. Also, a Sulzer duet from 24081 and 25313, Class 20 D8142 and Class 25, D7629.

NYMR - GENERAL OPERATING DAY: The plan had been to film 'Blue Peter'. But the A2 is unlikely to be back in action until our next issue. So we contented ourselves with recording a typical day's operation over this attractive line.

CAB RIDE HIGHLIGHTS: Our guide is Traction Inspector David Lane and driver Malcolm Rose as we boarded 158765 for a cab ride from Manchester Piccadilly to Sheffield over the Hope Valley Line.