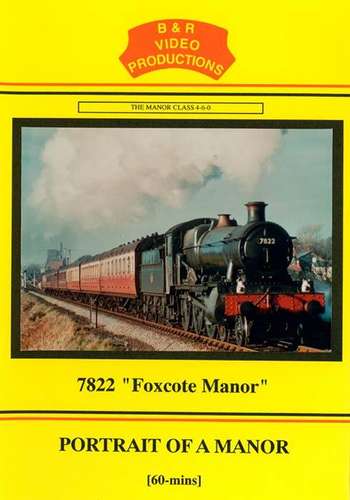 Here is a programme to commemorate one particular locomotive of the Great Western designed Manor class, 7822 "Foxcote Manor".

Rescued from Woodhams Barry Island scrapyard, it was restored to full working order in 1987 and spent the next ten years at work on the Llangollen Railway in Wales.

The time came when 7822 needed another full overhaul and this DVD has been made to further the work necessary to allow her to work a further ten years.

Using archive film from BR days, the story of the development of the class is first told from the 43xx class moguls to scenes depicting ten of the Manor class on their duties from Redhill in the south to the Cambrian lines in the north.

More archive film of its dismantling at Oswestry, through to steaming trials at Llangollen.

Spectacular double heading with another Manor, two prairie tanks, Standard Class 4, Castle and uniquely with A4 60009.

The whole profit from this programme goes to the Foxcote Manor Society, all material used in this production being free of charge, for B & R Video Productions and Foxcote Manor members wish to see her back in service once again.