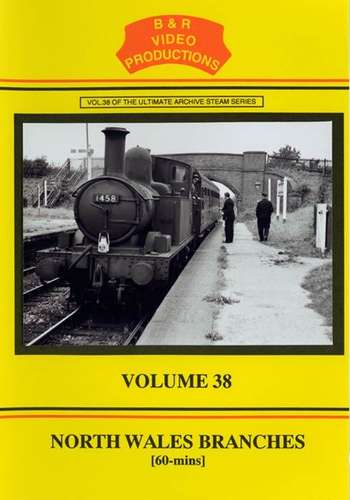 This is a slightly different type of DVD to our normal format.

Brian Cowlishaw of Denbigh took advantage of all the ex-Government black and white film stock in 16mm format that he could obtain, to film around four completely different lines in North Wales in the early 1960s.

Firstly he concentrated on documenting the Mold- Denbigh - Ruthin line visiting all stations like Bodfari and Starr Crossing.

This line was rarely filmed and it is with great pleasure that we present nearly 15 minutes of Brian's efforts.

He continued on the Wrexham to Ellesmere line before its closure in 1962.

Although we have this line portrayed in colour in earlier volumes, some people cannot get enough of rural branch or ex-Cambrian!!

Next comes on the mineral line from Brymbo filmed from the lineside at nearly every level crossing!

Again this is covered in great depth never seen before on DVD.

On to Bala for coverage of the line over Cym Prysor to Ffestiniog on the ocassion of the last passenger train over the line, Pannier hauled.

This coincided with the filming of the BBC Railway Roundabout team.

Finally we return to colour for a 1966 run by the LCGB up the Conway Valley and Rhyl to Denbigh line with ex-LMS Stanier 2-6-4T tanks and a Crab 2-6-0.