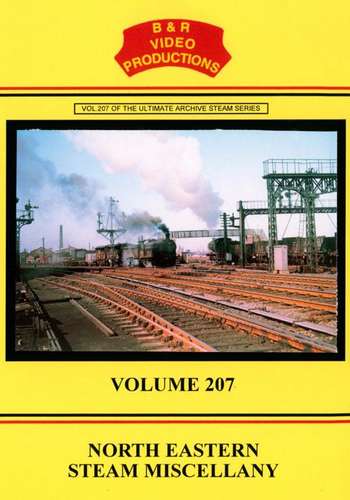 This volume in our miscellany series covers steam in the North East. Once again we use mostly previously unseen film compiled in the order the film runs off the original cine reels and largely without our usual detailed commentaries.

We start at Northallerton in August 1963 with a return journey to Newcastle where time is spent watching all the activities during a summer Saturday followed by visits to Gateshead and Darlington Sheds. At Scarborough, there are scenes that include Londesborough Road station and a train with an articulated twin-coach set.

Next we visit York in both 1961 and 1963 followed by visits to Leeds Central, Beverley, Malton and Filey Holiday Camp.

Much of this volume concentrates on the BR systems north and south of the Tyne where steam lasted until the summer of 1967. This was the last area where pre-grouping main line locomotives could still be seen at work. At Sunderland the shed is visited and we spend a lot of time at Ryhope Grange, Seaton Bank and the photogenic Silksworth branch.

Tyne Dock was famous for its 9F 2-10-0s working the Consett iron ore trains whilst at Pelaw we witness something for the diesel enthusiast, an English Electric Type 3 complete with brake tender!

In the area North of the Tyne during the period covered by our volume, Blyth was the largest coal shipping port in Europe. We see plenty of coal trains around Holywell, Bedlington, Percy Main, South Blyth and North Blyth. We also visit Immingham and Frodingham.

Gresley V2s are seen at Berwick on a special in 1966 whilst another special visits the Middleton-in-Teesdale branch in 1964. There is plenty of steam at Wakefield Kirkgate and Westgate stations as well as a Deltic interloper!

Filmed entirely in colour during the 1960s, an authentic sound track has been added along with a commentary.