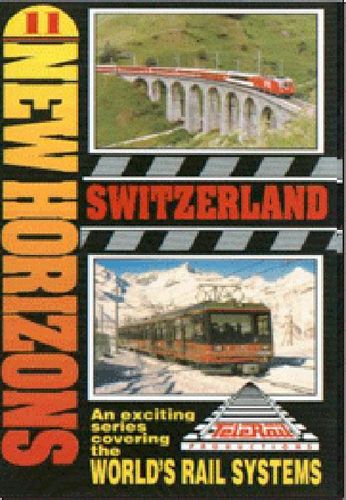 Although Switzerland is considerably smaller than the United Kingdom, it is linked by a vigorous and heavily used passenger and rail freight network. The colourful and varied multi gauged network easily connects express and local train services - not only with each other, but also with buses and even lake steamers. This is a country where punctuality is taken for granted and where all but the very smallest stations are staffed. The sophisticated network is virtually 100% electrified and runs through some of the most dramatic and beautiful mountain scenery in the world. Expertly filmed in both spring time, summer, and in glorious winter snow, this video provides a fascinating guide to a country overflowing with railway interest.
Topics include:-

The Saint Gotthard route, featuring both freight and passenger traffic along this very busy line, highlighting in particular the superb double spiral section near Wassen.

The Glacier Express. Superb lineside action along the route taken by one of Switzerland's most famous long distance trains.

The Rhätische Bahn, plenty of colourful freight and passenger activity centred around Filisur and onto the famous Bernina pass, highlighting the superb summit scenery, street running at Le Prese and the famous helical viaduct at Brusio.

The Bern-Lötschberg-Simplon route with passenger & freight action between Frutigen and Brig including the car shuttle service through the lengthy Lötschberg tunnel.

Main line traffic on the busy artery between Zurich and Basle, also an interesting site visit to the brewery at Rheinfelden.

Preserved steam from Realp to Furka also main line steam on the Rhätische Bahn near Samedan.

Rural action on both the Emmental-Burgdorf-Thun and Appenzeller systems.

The superb Montreux-Oberland-Bernois route, with magnificent winter snow scenery around Gstaad, including a cab ride to Schönried, and a ride aboard the Golden & Crystal Panoramic trains.

The famous rack railway for skiers from Aigle to Leysin.

The Gornergrat Bahn one of Switzerland's finest mountain lines with stunning winter views of the Matterhorn.