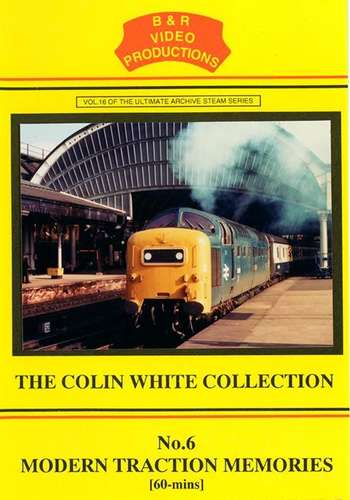 In collating Colin White's steam films for production B & R noticed that there were enough scenes of early diesels to make a one hour programme of types of diesel traction mostly lost in BR service in the 1980's.

Certainly some liveries are gone and generally all the film was taken before the video age.

So we can relive these early diesel scenes from the 1960's and early 70's, starting with the Hydraulics of Western, Warship and Hymek classes.

They are seen at work on railtours and normal service including a journey on the double-headed Hymek Swansong from Paddington to Hereford.

The Blue Pullmans looking so much like early HSTs at Paddington.

Class 50s double-heading the 'Royal Scot' in pre-electrification days, followed by a view of 'Kestrel' at a Cricklewood open day in 1969.

Electric traction is represented by views of the now lost 'Brighton Belle' seen in both it's liveries.

A complete journey by Channel Islands boat train along the Weymouth tramway with Class 12 haulage, 15233, having arrived behind D6529 a class 33 in blue.

Deltics are well covered at Kings Cross and Peterborough and even their wanderings to Harlow and Wandsworth.

We see Class 31s in green and blue liveries on a variety of workings including the Royal Train at Cambridge.

The whistling Class 40s follow at Bersham, Kings Cross and Manchester Victoria when they hauled stock to Rainhill in 1980. D200 restored to its green livery is seen at Whitchurch.

Memories of Peak haulage on the Midland main line is relived.

Brush Type 4s in a unique form which started the new era of colourful liveries is featured by 47164 at Chelmsford with the large Union Jack on its sides.

We end this look at the locos of this age with green-liveried 47s on the East Coast Main Line.

All told there are 14 different classes of traction and several locomotives seen in BR service now in preservation on this compilation.