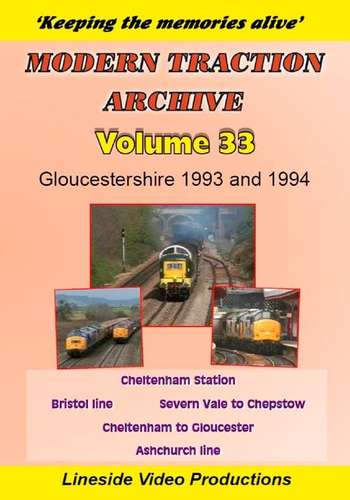 Classic BR-era diesels as we visit Gloucestershire in 1993 and 1994.

This programme looks at the British Rail era of the early 1990s in the county of Gloucestershire. The main cross-country route linking The Midlands with Bristol and South Wales heads south through the county through the large town of Cheltenham and Gloucester. We have chosen a number of well-known photographic locations to view the activity including on stations with Cheltenham being the focal point. We also look at the line along the river Severn towards Chepstow - including a view of the Severn Bore - and south along the line through Standish Junction towards Cam.

Filmed largely in 1993 and early 1994 a wide selection of motive power is seen including Classes 20, 31, 37, 43, 47, 50, 55, 56, 59, 60, 117, 150/1, 150/2, 156 and 158. Class 47s and Paxman-powered HSTs feature on Cross-Country passenger turns with parcels, china-clay, fertiliser, tanker trains, steel, car-component, engineers all making an appearance as we turn the clock back to a time when locomotives still dominated the rail network. Many different liveries are also seen, including BR-blue, railfreight grey, Parcels Red, Scotrail, EWS, Mainline Blue, Transrail, Regional Railways, Centro, Departmental and Virgin colours.