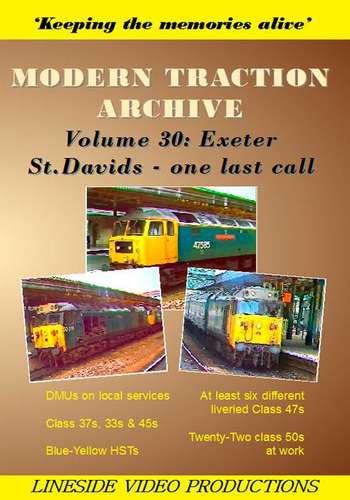 Exeter is one of the more well known stations for watching trains in the West Country; this programme looks at the variety of trains to be seen as far back as 1984, 1985, 1990 and 1991.

Class 50s and class 47s dominate the services to be seen with HSTs also witnessed on cross-country and services to and from London. Our filming also includes the period in early 1985 when the old semaphore signals and trackwork were replaced during engineering work and it is fascinating to see the transition taking place. Our 1984 material was filmed when video cameras where in their infancy and were just then available on the domestic market - the scenes show the old semaphore signals in action as well as the old trackwork, now long since replaced.

We have classes 33, 37, 45, 47, 50, HST and various DMU classes in action, including class 101 and class 117. Many of the HSTs filmed are in their original livery of blue/yellow with blue-grey coaching stock - and of course are all still fitted with the Paxman Valenta engines coupled with their distinctive sound.