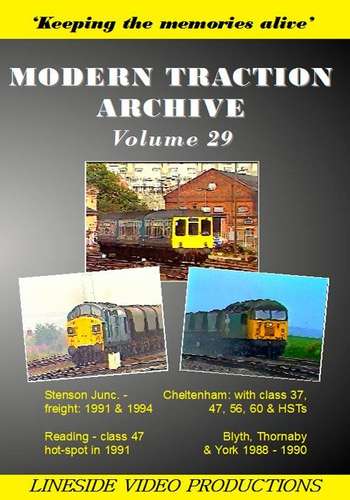 In this programme we return to the mid-1980s and early 1990s to witness classic British Rail diesel traction at work across the network.

We begin at Stenson Junction to the south of Derby on the busy freight route between the North Midlands, Birmingham and the South. This location is still popular with train watchers today, although the traction is much different. Two visits are made, the first in the Summer of 1991 and the second in October 1994. Class 56s and 20s are seen on coal trains into the now closed Power Station at Willington, whilst on the mainline, 47s, 31s, 56, 58s and 37s are seen on a mixture of coal, fuel, steel and freightliner services with many in the early freight-sector liveries.

Our third location is just south of Cheltenham as we sample the action from March 1997. Our visit coincided with the Cheltenham Gold Cup horse race which attracted a number of race-day specials. Early GWR-liveried HSTs, as well as Class 37s, Class 56, Class 60s and 47s are also seen. 47845, 765, 777 and 787 are seen on Race-Day specials as well as pairs of 47s on Longbridge to Swindon car component trains, class 60s on clay trains, class 37s on Hull to Baglan Bay tank trains, 37 on nuclear-flask traffic, 56035 in ‘Loadhaul’ livery on MGR duties are just some of the others included.

In our final section we travel to the north-east of England between 1987 and 1990 to study traction around Blyth, Sunderland, Thornaby and York. Coal and Aluminium workings are seen operated by class 56s around Blyth, including blue 56013 on an unfitted working. Class 56s and 31s at Ryhope Junc. feature next, before we continue with a look at traction through Thornaby station including classes 31, 37, 47 and 56. Finally we travel to York with HSTs and first and second generation DMUs at Holgate Bridge Junc.