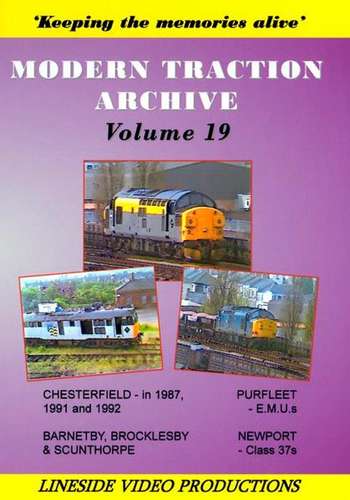 Chesterfield is a classic location on the line up from Nottingham and Derby to Sheffield and the north. Back in 1987, 1991 and 1992 freight activity was high and so too was the variety of motive power. Coal, steel and ballast traffic dominate on the freight avoiding lines and loco-hauled passenger trains and HSTs appear on the fast lines. Classes 20, 31, 37, 45, 47, 56, 58 and 60 all appear as does HSTs and class 150s - then very new to the railway scene. We also travel to just south of the station to give added variety - pairs of class 37s, a 60 on passenger stock and class 31 in BR Blue are just some of the examples seen here.

Brocklesby, Barnetby and Scunthorpe are all visited in this section with coal, iron ore and Oil workings dominating the traffic seen Pairs of class 31, class 37s and 20s are all seen at work, with some classic locations now long since consigned to history, Class 56s, 47s and 60s are also captured. At Scunthorpe we see all-over blue 37003 heading light engine and 47 379 running light in the nearby yards, with 60039 storming through on Oils. Just some of the motive power to be witnessed in material shot in 1989 and 1991.

Purfleet and Dagenham - a brief visit to the Eastern side of London in 1990 as class 305 units are seen at work. Also making an appearance are pairs of class 31s and 37s on freightliner trains as well as a class 85 moving in Dagenham car-plant exchange sidings.

Newport - an extended look at freight operations in South Wales where class 37s dominate the motive power to be seen. A wide range of colour schemes are seen from Trainload coal and metals, to all-over blue, ‘Dutch’ departmental livery and General Railfreight grey. Coal trains, Iron-Ore, Speedlink Coal, lime, Oil, freightliner ballast, Speedlink and even a rake of old MDVs are seen. As well as Class 37s, we see class 56, class 47, class 08 and a rare appearance for that time, a class 31. Newport Tunnels and views from the multi-storey car-park on the eastern side of the station are also included. Filmed in 1990 and 1991.