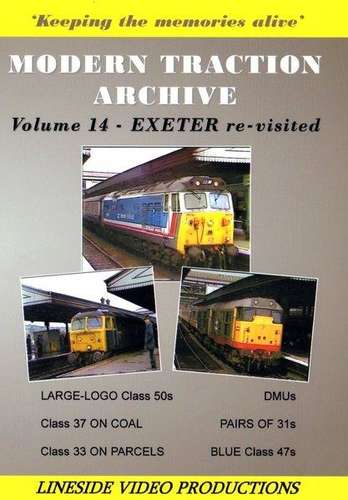 Exeter St.Davids is one of the major train-watching locations in the south-west of England, and never more so than on Summer Saturdays as holiday trains dominate the trains that were seen. In this second look at the traffic through this City (Volume number 8 was the first) we travel back to 1986, 1987 and 1988 to sample the diesel variety under the then British Rail era.

There are sections within this programme each separated by different time periods: the first is the Winter of 1987 where we see Class 50s, 47s, HSTs and DMUs on a variety of passenger services. Next we travel to Exeter Central and Pinhoe stations during engineering diversions in March 1986. Blue/yellow HSTs, Large-logo Class 50s and 47s are again seen on passenger trains: we even see a class 33 on a parcels working!

Cowley Bridge, just north of St.Davids is visited in April 1986, where HSTs, Class 33, DMU and class 50s are seen; we also view 37 223 on an empty coal train. Back to the main station and it is Summer Saturday time as numerous trains head to and from the south-west resorts. Pairs of class 31s, Network south-east liveried class 50s and large-logo class 47s again dominate the scene.

In our final section it is another bumper train-watching Saturday as we witness services on the 27th June 1988 - more nostalgic loco-hauled formations.