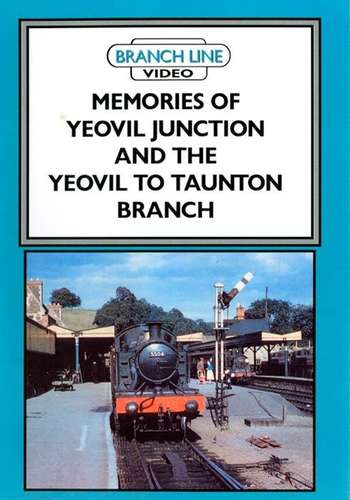 Memories of Yeovil Junction and the Yeovil to Taunton Branch is based on three films made by Stan Peerless during the 1960s.

The first concentrates on Yeovil Junction and shows the fascinating variety of passenger and goods traffic that used to work through this busy station.

Express trains thunder through on their way to London, or westward to the holiday resorts of Devon, whilst locals from Salisbury and Exeter stop to collect passengers, many of whom will have travelled to the junction station on the branch train which shuttled between Yeovil town, Yeovil Pen Mill and Yeovil Junction.

This fascinating service formed the second of Stan's films and provides a wonderful record of a service that no longer exists, though the line between the Junction and Pen Mill remains open for freight traffic.

The Taunton Branch started at Yeovil Pen Mill, and although the station remains virtually unaltered from the days of steam, today it is about the only reminder of the branch left in the Yeovil area.

Most traces of the Town station and the branch have totally disappeared since closure in the 1960s, making Stan's record of the branch all the more interesting.

Each station on the branch is covered along with the varied pattern of services that used the line.

Views of Cogload Junction and Taunton Station include Western Region steam as well as Diesel Hydraulics.

To complement the 40 minutes of superb archive cine film we have interviewed many of the men who worked in the area, and indeed the commentary is written by Derek Phillips who worked as a fireman from Yeovil Town Shed for many years.

The final part of the DVD looks at what remains of Yeovil's railways today and through black and white photographs creates many poignant then and now views.