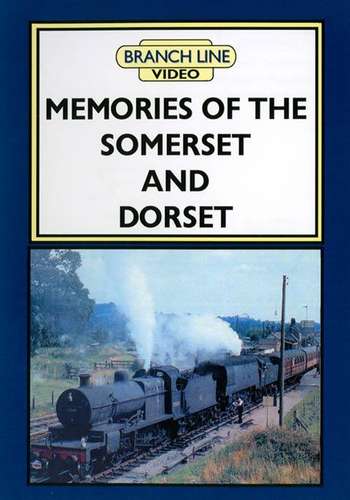 Few railways could rival the character and charm of the Somerset & Dorset.

From the climb out of Bath Green Park to the fierce gradients of the Mendip Hills around Midsomer Norton and Shepton Mallet where locomotives struggled with heavy trains packed with holidays makers.

From the mysterious Somerset Levels around Glastonbury and Highbridge, through to the beautiful rolling countryside close to Blandford Forum and Templecombe the S & D has rightly grown to be one of the country's most famous lines.

This DVD contains 60-minutes of superb archive cine film and allows us once again to relive the delights of a journey over this most famous of railway lines.

The DVD takes a look at the whole line starting at Bournemouth West.

We then progress towards Bath taking a look at each of the stations with lineside action in between.

Highlights include some very rare shots of the remains of the original S & D line from Corfe Mullen to Wimborne and an elderly 3F shunting at Shillingstone and Stalbridge.

Templecombe is looked at in depth with views not only of the peculiar reversal undertaken by S & D trains but also at workings on the Southern region main line and some marvellous shots of the Motive Power Depot.

At Cole we see where the line crossed the Western Region before we arrive at Evercreech Junction.

Here the camera of Stan Peerless takes the timeless journey down the branch to Glastonbury and Highbridge.

Highlights of this section include footage of a goods train on the level crossing at Highbridge before we see the locomotive being turned inside Highbridge Works.

We also catch scenes of the Saturdays only passenger working to Burnham-on-Sea before we return to Evercreech Junction.

As we carry north we catch scenes of trains passing over the summit of the line at Masbury and through the beautiful countryside around Midford and so into Bath Green Park.

Accompanying the film there are interviews with some of the men who worked on the S & D as well as people who travelled the line.

Their reminiscences help to bring back many treasured memories of the Somerset & Dorset.