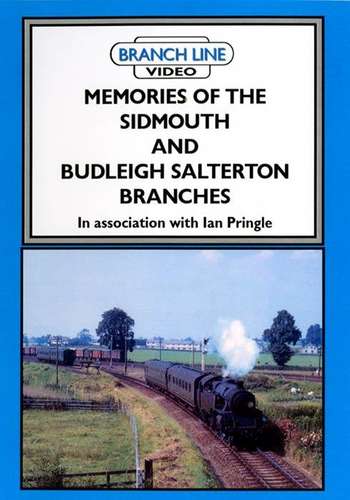 The seaside resorts of East Devon dotted along the coastline between Lyme Bay and the Exe estuary have long been a popular holiday destination.

For many years the railway played an important role in developing the towns of Sidmouth and Budleigh Salterton - both connected by branch lines from the Southern's main line between London Waterloo and Exeter.

As an independent railway company until the 1923 grouping, the Sidmouth branch also served the rural communities of Ottery St. Mary and Tipton St. Johns.

By 1903 a branch line from Tipton St. Johns to Exmouth via Budleigh Salterton completed the East Devon railway map.

This unique documentary includes over 40 minutes of rare archive cine-film - much of it never shown before - and follows the history of both lines from their earliest days until closure in 1967.

In the summer of 1963, we take a journey from Sidmouth Junction to Sidmouth in steam days, with scenes at Ottery St. Mary and Tipton St. Johns.

BR Standard Tank and M7 locomotives are seen in action.

The DMU era during the mid-1960s is well covered on a trip from Sidmouth to the junction, where main line activity is in evidence - plus a journey from Tipton St. Johns to Exmouth via Budleigh Salterton.

A lively narrative describes the typical daily workings on each line and is complemented by the reminiscences of former local railwaymen - whose fond memories bring to life the atmosphere and character of the two branches - a chapter of history now sadly missed by many enthusiasts and East Devon folk.

Finally a "Then and Now" sequence takes a fascinating look at the two branch lines almost 40 years after closure in 1967 - and offers a fitting tribute to those early railway pioneers whose vision of the future lives on into the 21st century - albeit only as a memory.