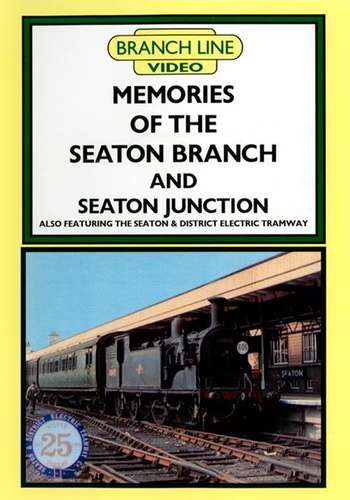 The Southern Region Branch Line from Seaton Junction to Seaton is perhaps best remembered for the thousands of holiday makers who used the branch to reach the pretty little seaside resort up to its closure in 1966.

However the branch had so much more to offer the discerning traveller.

The line clung to the slopes of the surrounding hills with only the occasional farmhouse for company, before entering the valley of the River Coly at Colyton.

The beautiful rolling hills give way at Colyford as the valley broadens out and joins forces with the River Axe.

With over 25 minutes of archive cine film we take a look at this pretty little line and the people and places it served.

The main action, from the familiar camera of Stan Peerless, captures the M7s working the branch in 1962 and takes us on a journey from Seaton to Seaton Junction.

Here we can watch a dazzling array of Southern Region Motive Power on the main line both at the station and on Honiton Bank.

There are also scenes of Pannier Tanks at work on the branch as well as the DMUs in the final year of the line.

When the branch closed in 1966 much of the trackbed was subsequently rescued and today plays host to the marvellous Seaton and District Tramway.

Through some wonderful vintage cine film taken by Gordon Langford we can trace the fascinating history of the tramway from its early days at Eastbourne and its subsequent removal to Seaton in 1970.

Modern views of the line enable us to see how far the tramway has progressed, including its new "Victorian Terminus" at Seaton, whilst a wealth of black and white photographs help to create many poignant then and now views.

The DVD is accompanied by the memories of those who worked on or travelled over this fascinating little branch.