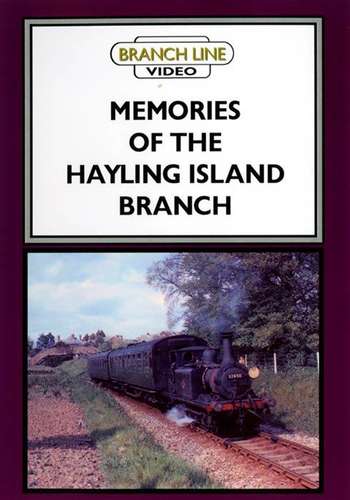 The Hayling Island Branch was one of the Southern Railway's most famous due to the use of London, Brighton & South Coast Railway Terriers as its motive power right through to the closure of the line in 1963.

It was the timber bridge across Langstone Harbour and its associated weight restriction that necessitated the use of these diminutive yet much loved locomotives.

Although the branch provided a lifeline for the residents on the island it also carried generations of holiday makers to the seaside and is fondly remembered by all who were fortunate enough to travel on the line.

To try and recapture the lost charm of this delightful line, Branch Line Video have brought together over 20 minutes of high quality archive cine film, much of it shot on 16mm and almost all of it in colour, allowing us a highly detailed look at this fascinating branch.

Each of the stations at Havant, Langstone, North Hayling, and Hayling Island are explored in depth including many poignant then and now views.

Coupled to this we have photographs from the famous collection of A.A.F. Bell.

Alan's vast knowledge of the line allows us to see not only the railway but allows us a unique insight into the people who worked on the branch.

We have visited all the important locations on the branch and filmed what remains today, including a visit inside Havant Signal Box.

As the Terriers returned to their home shed at Fratton each night we also explore what remains of the site today.

Whilst filming at Fratton we capture Merchant Navy Pacific, Clan Line, the first steam locomotive to reach Portsmouth for over 20 years.

We gained a unique access to the trackside to record this historic event.

Finally we have memories from many of the men who worked the line during its life, and the whole film makes for an absorbing and sometimes amusing insight into this greatly missed branch.