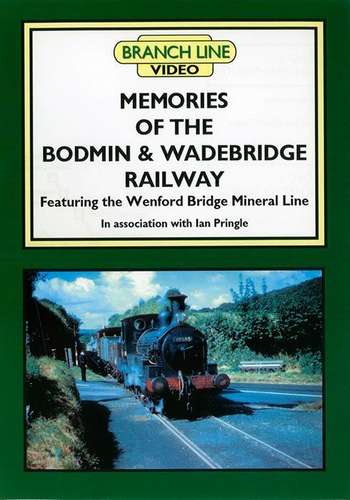 It is the 30th September 1834. An event is taking place in the county of Cornwall that will shape the destiny of Britain's future. It must have been a momentous occasion when the first steam hauled train ran between Wadebridge and Bodmin, one of the earliest railways in the country.

Driven by a true pioneering spirit, the story of this remarkable railway, which lasted almost 150 years, is as fascinating today as it must have been at its outset.

With a stunning collection of over 45 minutes of rare archive cine film, this DVD chronicles the life of one of Britain's most famous local lines from its inception, when the concept of a station was still unknown, through its early years, passing at first "illegally" to the L&SWR, then to the Southern Railway in 1923 and finally with British Railways through the post-war years, to eventual closure in 1983.

Passenger services, steam and diesel, are captured between Bodmin North and Padstow, including the Boscarne Exchange Platform to Bodmin North railbus link introduced in 1964.

With an in-depth history of the railway, station survey, including the halts and "wharves", plus some wonderful memories caught through the fond reminiscences of former railway staff and a "Then and Now" sequence, the programme offers the definitive story of a truly unique railway that has won a well earned place in the hearts of many local people and railway enthusiasts.