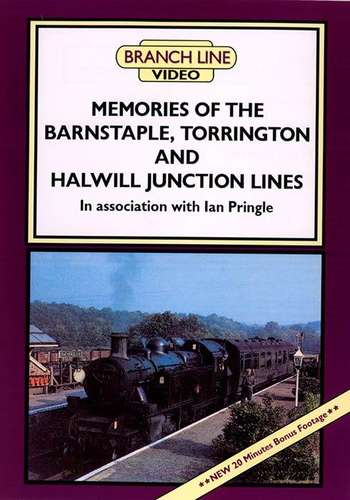 Opened as late as 1925 the North Devon and Cornwall Junction Light Railway existed in a world entirely of its own, exerting a powerful charm on those lucky enough to travel on it.

The railway was linked at its northern end with the Torrington to Barnstaple line, which wound its way through the beautiful Devon countryside before emerging on the banks of the Torrige to give the traveller some superb river views.

One person who fell under the magical spell of the line was Ian Pringle, who set out to capture on cine film the last days of steam-hauled passenger workings over the branch.

Later he returned to capture the diesel-hauled workings to the clay pits at Meeth and Marland and the milk and fertiliser traffic at Torrington.

Ian's memories of his first visit to Watergate Halt perfectly capture the charm of this country railway.

"It was one of those moments you always remember - a first glimpse, caught through the dappled sunlight of a woodland glade. Deep within the heart of North Devon, I came across this tiny wayside halt, no longer than a single carriage length."

With over 40 minutes of superb cine film, the programme explores the history and fortunes of these two independent branch lines.

Highlights include scenes shot in the final days of steam, the last passenger services over the line and a cab ride to Meeth in the late 1970s as well as the steam cranes at work on Fremington Quay.

The programme is complemented by a history of both lines as well as then and now views allowing us to see how much has survived in the years since closure.

The charm and character of the two lines is captured through the reminiscences of local railwaymen.

Their fond memories add colour and humour to the life of the lines and help re-create the special atmosphere that existed on the railway linking North Devon and Cornwall - now sadly lost to the pages of history.