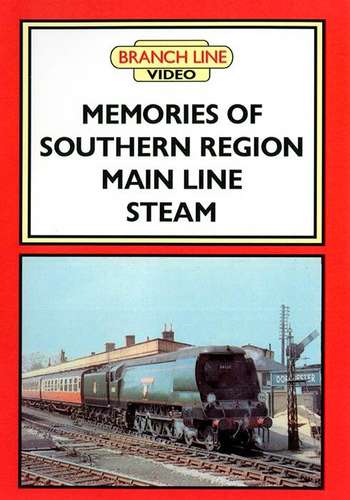 Memories of Southern Region Main Line Steam takes a look at the last main line in the country to use steam locomotives on express passenger diagrams.

A superb collection of cine film has been drawn together and includes such varied scenes as Waterloo, Nine Elms MPD and Clapham Junction with some scenes dating from 1927 through to the famous Upwey Bank between Weymouth and Dorchester.

The main archive film action comes from the cameras of Edward Griffith and Stan Peerless. Edward Griffith visited Basingstoke in 1965 and captured various classes of locomotive from both the Southern and Western Region.

The excellent camerawork shows the steam locomotives to perfection from the lowly goods train through to the express trains heading for Bournemouth and Exeter.

All this is complemented by the work of Stan Peerless who made a memorable record of the main line between Wareham and Weymouth in 1964, including the peculiar reversal at Dorchester South, boat trains from the Channel Island ferries as well as steam engines hard at work on the fierce climb up to Bincombe Tunnel.

To finish the journey from Waterloo we have cine film from the collection of Ivo Peters and C.R.L. Coles. This allows us to view the boat trains working along the Weymouth Quay Branch as well as the Channel Island ferries at rest in the harbour.

The cine film, which lasts for over 50 minutes, was all taken on 16mm and the results are truly memorable. All the grime and the glory of main line steam's final stand is here.

The archive cine film is complemented by brief views of modern motive power at work on the old Southern Region as well as various steam locos at work on main line specials and preserved railways.

Finally we have drawn together many of the men who worked on the steam engines during steam's final stand to give their account of what life was like on the footplate during the final years.

The film is a magnificent tribute to Southern Region main line motive power past and present and is sure to appeal to all lovers of steam.