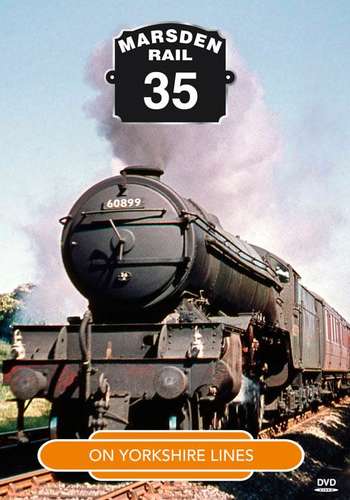 The programme features Yorkshire in the 1960s, beginning with views of the East Coast Main Line in and around York, with scenes at the city’s busy motive power depot and station.

From York, we move to Church Fenton, the junction for routes to Leeds and Sheffield, with a focus on the now vanished Church Fenton North signal box and the traffic under its control.

Next is Leeds City Station, featuring a wide variety of steam and early diesel locomotive types, plus views of Farnley Junction MPD, and at nearby Leeds Central Station, ‘Deltics’ on ECML services can be seen rubbing shoulders with elderly ‘J50s’ on station pilot duties.

Closed in 1904, Rothwell Town Station witnessed a rare influx of passengers in September 1958, with the arrival of a railtour headed by a pair of ex-GNR Class J6s.

The Knostrop Sewage Works rail system with its WW1-vintage locos, plus footage of 45596 Bahamas leaving the Hunslet Engine Works in 1967 concludes a fascinating picture of Leeds in the 1960s.

Moving to Bradford, the Quarry Gap Yard to Stanningley pick-up goods is featured in 1967, worked by one of the last B1s in service, plus rare film of a former GCR Class 04, banked by an ex-GNR N1, at Cutlers Junction in 1956.

Finally, a journey on the Yeadon branch in 1961 brings to a close the visit to Bradford.

Moving west, Huddersfield’s trolley bus system is viewed in its last years of operation, together with views at the Standedge Tunnels, before continuing onto Penistone with Class EM1 and EM2 electric locomotives still in charge of Woodhead Route services.

From Penistone, we move to Barnsley’s Exchange Station, still used as a diesel stabling point.

New Oaks and Monkspring Junctions are also featured, along with film of Oaks Viaduct shortly before its demolition.
At Roundwood, near Rotherham, the London Midland Region and Eastern Region main lines passed within 50 yards of each other and film taken in 1962 shows a wide range of motive power.

We leave South Yorkshire on board the ‘East Midlander Railtour’ in 1962 and the next location is Skipton, with steam much in evidence, including the stone workings on the scenic Grassington Branch.

Finally, we return to York, with Class 72 Joem working on the truncated route of the Derwent Valley Light Railway, shortly before total closure of the DVLR in 1981.